If you were to pick a legendary experiment in psychology in the 60s, there would be various examples, but the Observation Learning experiment conducted by Albert Bandura (1961, 1963) and his colleagues is not missing. The results of this experiment have caused a great stir throughout society, from the problems of children’s education and crime at the time to the effects of popularized TV violence on the public. It is often used in modern times to explain the social problem of whether violence is learned through games.

Although the experiments vary depending on the subsequent experiments, the following is a summary: First, we divide children about 4 years old into three groups of 24 [1]. For convenience, we will divide into groups A, B, and C. First, let the children of Group A observe the adult male playing in a room full of toys [2]Adult men play with wooden hammers, kicking, and hitting other toy animals that look like Rooftop dolls, but at the end of the experiment, other people come to praise and give gifts to adult men who have finished this violent play. 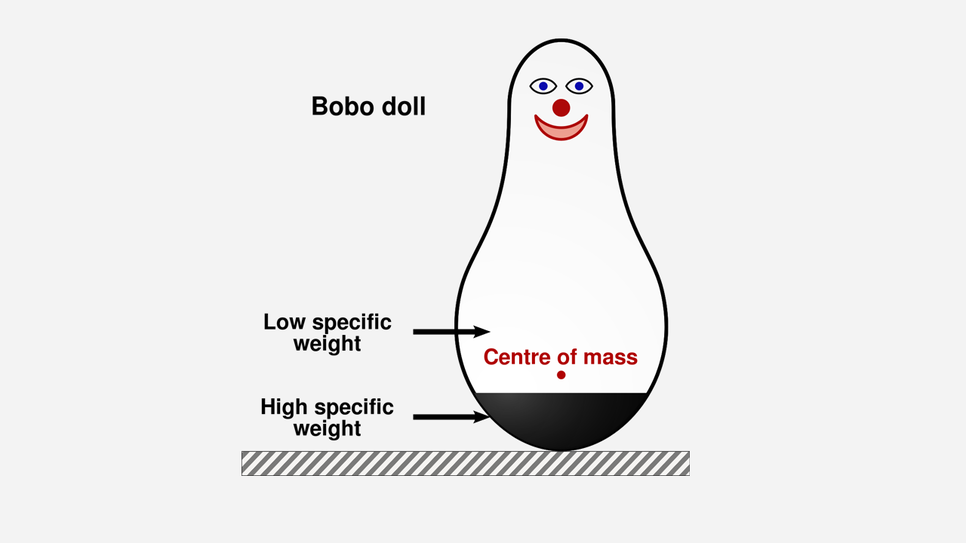 Bobo dolls used in experiments. I understand why four-year-olds hit me (…)

Next, group B’s children also observe adult males (or females) playing in toy-filled rooms, where unlike group A, the male model does not act violently against Bobo dolls, and plays nonviolent games such as stamping and toy dolls, and the experiment ends. The last group C didn’t show the model’s play at all in advance. After the model’s play, Bandura and her group of children from groups A, B, and C each enter a room with the same toys as the adult male’s playroom. And we looked at what each group of children did and played.

As a result of the experiment, children in Group A, who observed the behavior of violent models, found that they were more likely to imitate the behavior of the model and to inflict violent behavior and language on Bobo dolls. Interestingly, the more gender the model is like the child, the more violent the child is. In subsequent experiments, children in group A were divided into groups where models were praised for their violent behavior, and groups where model men were punished, such as being beaten by newspapers, showed more violent tendencies.

Observation learning experiments had social repercussions because they argued that learning was possible simply by observing other people’s behavior, in addition to classical conditioning theory, which claimed that human behavior was learned through specific stimuli, especially rewards, or operational conditioning theory, which claimed learning was done through specific actions and feedback. This has allowed us to create social problems such as whether violence can be learned through TV.

Attentional is the process by which people focus their attention on models that are subject to observational learning. In game tutorials, it is used as a way to highlight specific objects or to draw user’s selective attention through attractive visual characters. The casual puzzle game Peek Games and the card battle RPG, Netmarble tutorials, visually highlight areas other than the target blocks (dimmed, opaque screen in a specific color) or highlight the subject of attention so that users can learn what to do when combining blocks or creating special-function boost. 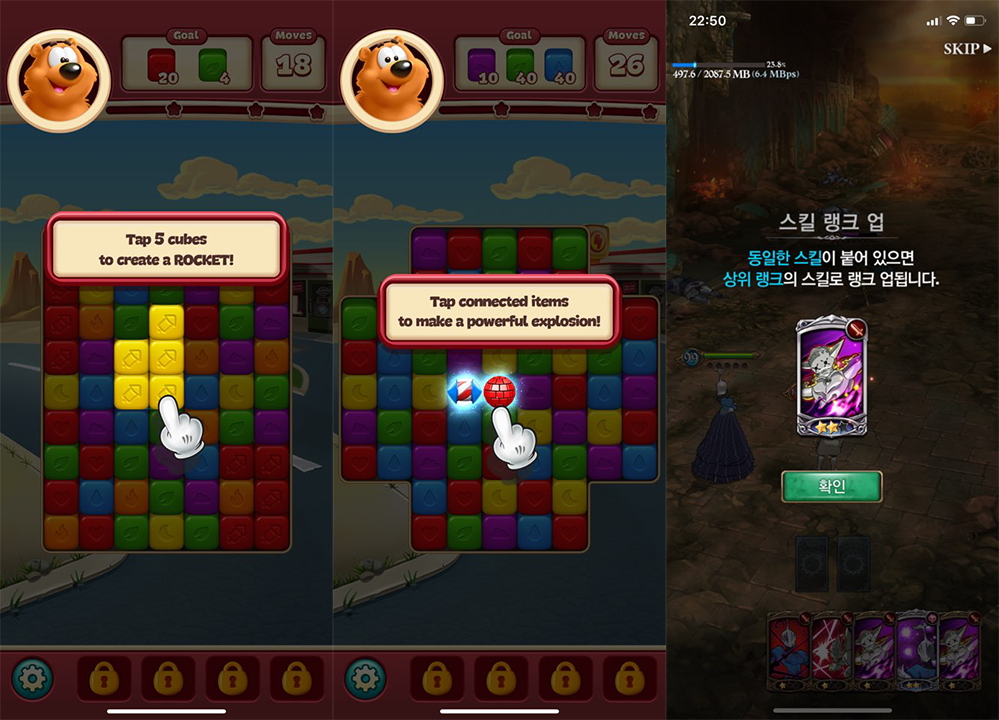 Furthermore, follow-up studies in observational learning show that in this case, the more homogeneous the model is, the higher the social position is, and the more attractive the focus on the object is. Epic Seven and Seven Deadly Sins are designed to give users the first experience of colorful visual characters set at high levels and rarity [3] during the initial tutorial. Users focus more on the learning process through visual emphasis of beautiful and powerful characters. This early tutorial character setting will also lead to the ‘Priming Effect’, which will be covered in the next part.

Second, in the Retentional, the content of the learning should remain in your memory. Learning becomes easier when the object of learning can be easily remembered, whether in the form of language or in the form of certain visual symbols, and when the action required is simpler. To generate boosters such as rockets, bombs, and rainbows, a specific shape and number of blocks must be combined in the Toon Blast. Visual cues (symbolized rockets, bombs, rainbows) are designed to be easily linked to the symbol of the booster produced as a result of the action. These characteristics can be seen similarly in Epic Seven. The visual properties of buttons expressing the skills of each character are designed to be easily connected to the visual properties of the production after the skill is invoked, helping to learn the tutorial on the skill activation.

Third, Motor Reproduction refers to the process of reproducing the behavior of the model that the learning subject remembers directly into the body. For the playback process, the learning subject’s ability to act again and the context of the environment must match. Tunblast’s level design provides a level design with adjusted probability to facilitate the generation of specific boosters at subsequent levels after the initial learning of certain boosters such as rockets, bombs, and rainbows. In addition, the booster is also provided free of charge so that you can pre-set the booster and play the game. Likewise, Epic Seven is designed to review characters and skills experienced in advance through autonomous battles after the tutorial. However, if you want to experience a powerful and beautiful character other than the main character that you experienced in the tutorial, you may be tempted to turn the gacha (drawing) (…). 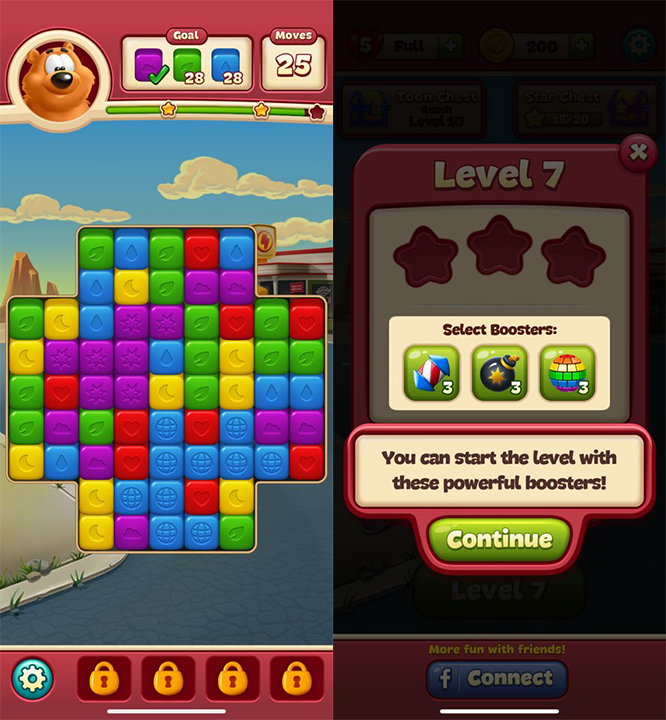 Booster is provided free of charge, and a level design that can be easily created

Conditioning is the process of motivation or desire to realize what the user has learned in action. Motivate users to reproduce their learned behaviors after a tutorial by showing the pleasure of a spectacular production as a result of learning, or providing immediate results such as level clear. 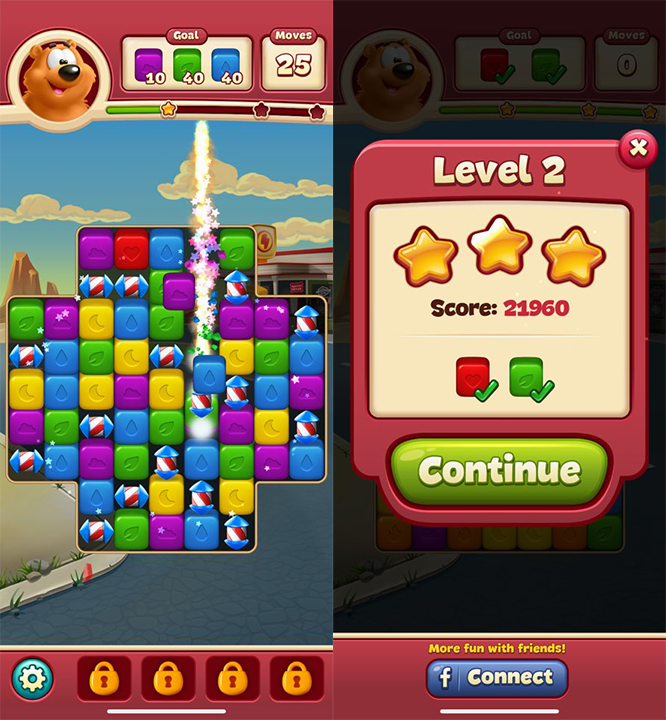 It easily clears the level with a cheerful booster

With a big and beautiful performance, we wipe out the enemy

The tutorial experience is a key experience to bring the user on board to early gameplay. The findings of observational learning suggest important points where tutorials can be more effective.

1. Provide visual emphasis to make it easier for the user to focus on the tutorial during the attention process.

2. Provide well-symbolized visual cues to facilitate the user’s memory during the gripping process.

3. Provide an environment to easily reproduce the contents learned during the playback process.

4. Provide incentives such as compensation so that the contents learned in the synchronization process can be continuously reproduced.

[1] Within each group, two gender-controlled groups were also divided, but they were omitted because they could be complicated.

[2] Depending on the year of the experiment, we can show actual adult males (female) and we can show images.

[3] In general, the character’s growth limit is limited due to the high rarity, which induces high rarity characters to be owned (called and spent) for game clearing or PvP victory.