Footwork on the doorstep

In psychology, kicking on the doorstep is a technique that allows you to agree to a small request before a larger one. It’s a step-by-step psychological technique, as if you’re just slightly shutting the door that’s about to close, and then gradually entering the door. For example, a door-to-door salesperson starts by asking the landlord if he can just walk into the house for a while to demonstrate the product. According to an actual study, if you go from house to house and receive a fundraising, you will receive a simple signature on the petition first, and then visit again a few days later, and the rate of accepting the fundraising is higher. [1]

Footing techniques in the wallet (…door)

Footing techniques on the doorstep are often used in on-boarding experiences, such as the membership phase of app-web services. For example, shopping mall membership is an example of a shopping mall that requires complex user information, starting with information that requires a small degree of involvement from the user, such as a mail address. When you first sign up as a member of a shopping mall, you can sign up very simply these days by linking portal-social services such as Facebook and Naver. However, when the actual payment time comes, you must enter more complex personal information such as the address to be delivered and card information for payment. If you have to enter this personal information from the beginning, you can feel annoyed and psychological rejection, so you can step up your involvement. But pay-to-win (Free-to-play) [2] gaming services and sample marketing can be seen as similar strategies.

A closer look at the free-to-play (but-pay-to-win) game service, especially the In App Purchase [3], shows that the footing technique is more cleverly applied to the doorstep. It’s not a doorway, it’s a design technique that steps into your wallet.

The role of the lowest-priced product, such as starter bundles, is especially important in games that induce users to make light payments, such as mobile casual games. Starter Bundles are usually the cheapest and most efficient of all bundled products, *designed to pay only once per user. In the case of casual games, it serves as a bait product that induces users to take the first step in in-app payment lightly through a starter bundle and gradually pays for more expensive products after the product disappears after payment. 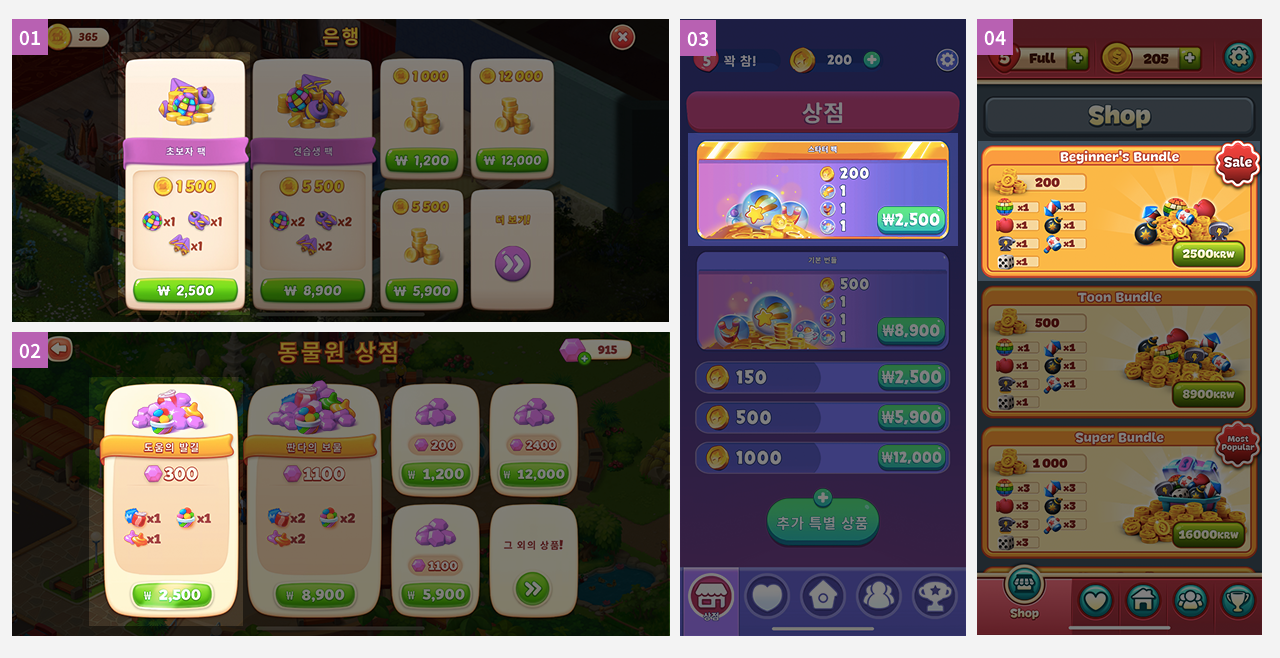 You can also step into your wallet in a more persistent way than the starter bundle. The popular casual running game Cookie Run: Oven Breaks sells a special package to celebrate updates every month on a regular basis. This product is designed in a total of three stages, and in the first stage, you can pay for the product virtually free of charge for just two crystals [4]. If you pay, you’ll get 200 crystals, more than 100 times the amount consumed (…)i) Immediately after the user pays for this first-stage product, the second-stage product is exposed, which consists of three products priced from KRW 3,900 to KRW 12,000. The price of goods is getting higher. And the last three-step product will be exposed to the user who paid for all three products. 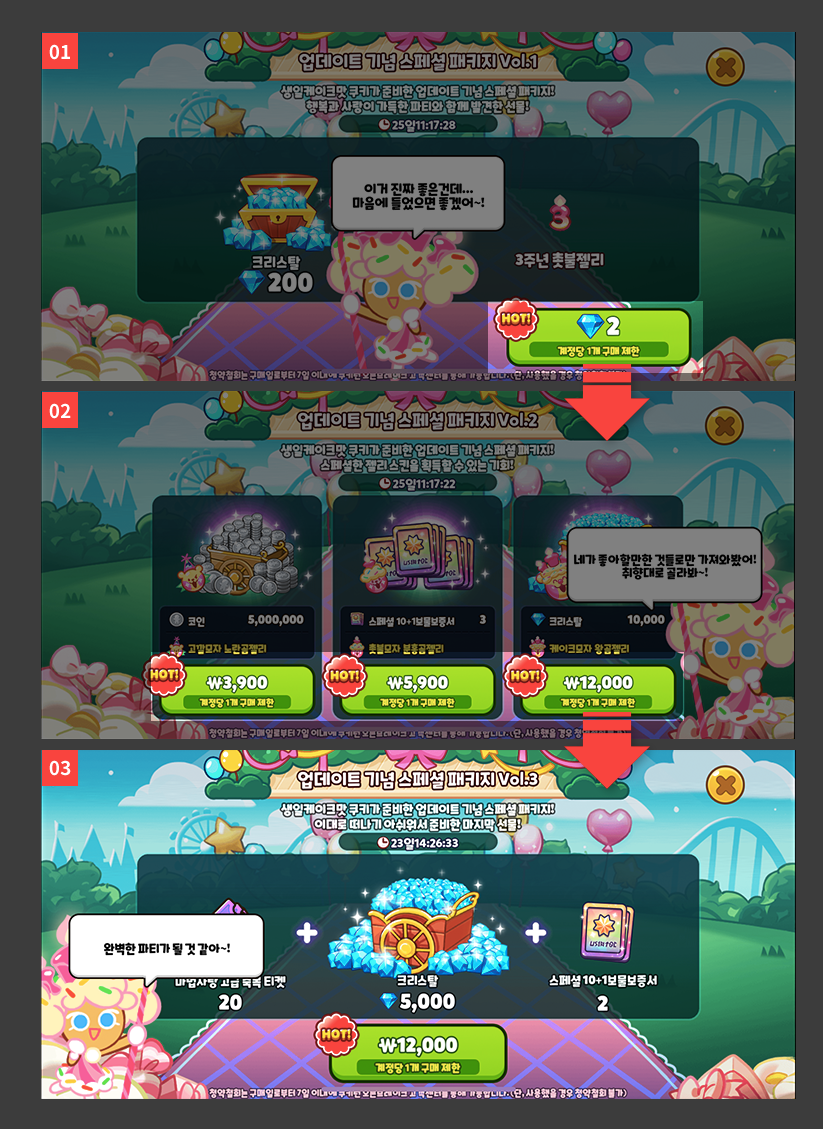 Cookie Run: Special Package to commemorate the update of the oven brake 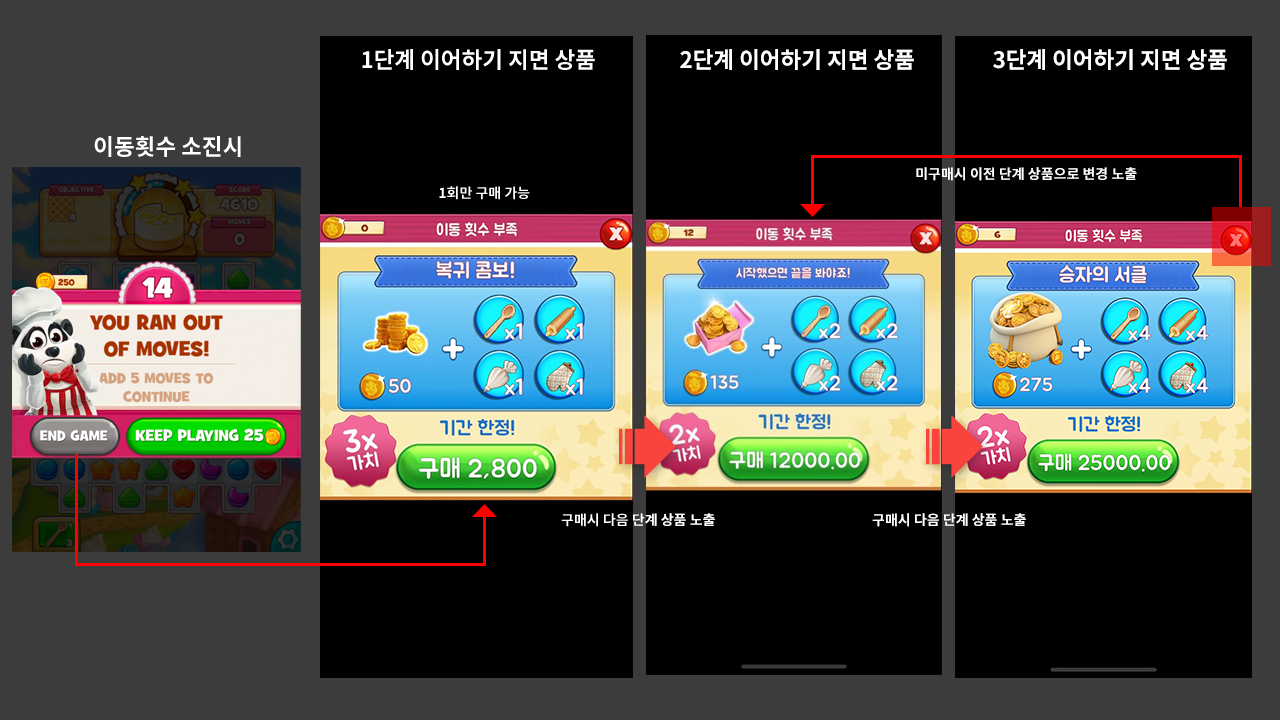 There’s also a way to step into your wallet in a more subtle way. In the mobile casual puzzle game, Gardenscape (Playrix), a store UI that had been sorted from cheap to ascending, cleverly encourages users to pay for higher-priced products by changing their sorting priorities from expensive to descending. This design can also be found in other casual puzzle games of the same genre, such as Peek Games, and is a good example of anchoring effects. 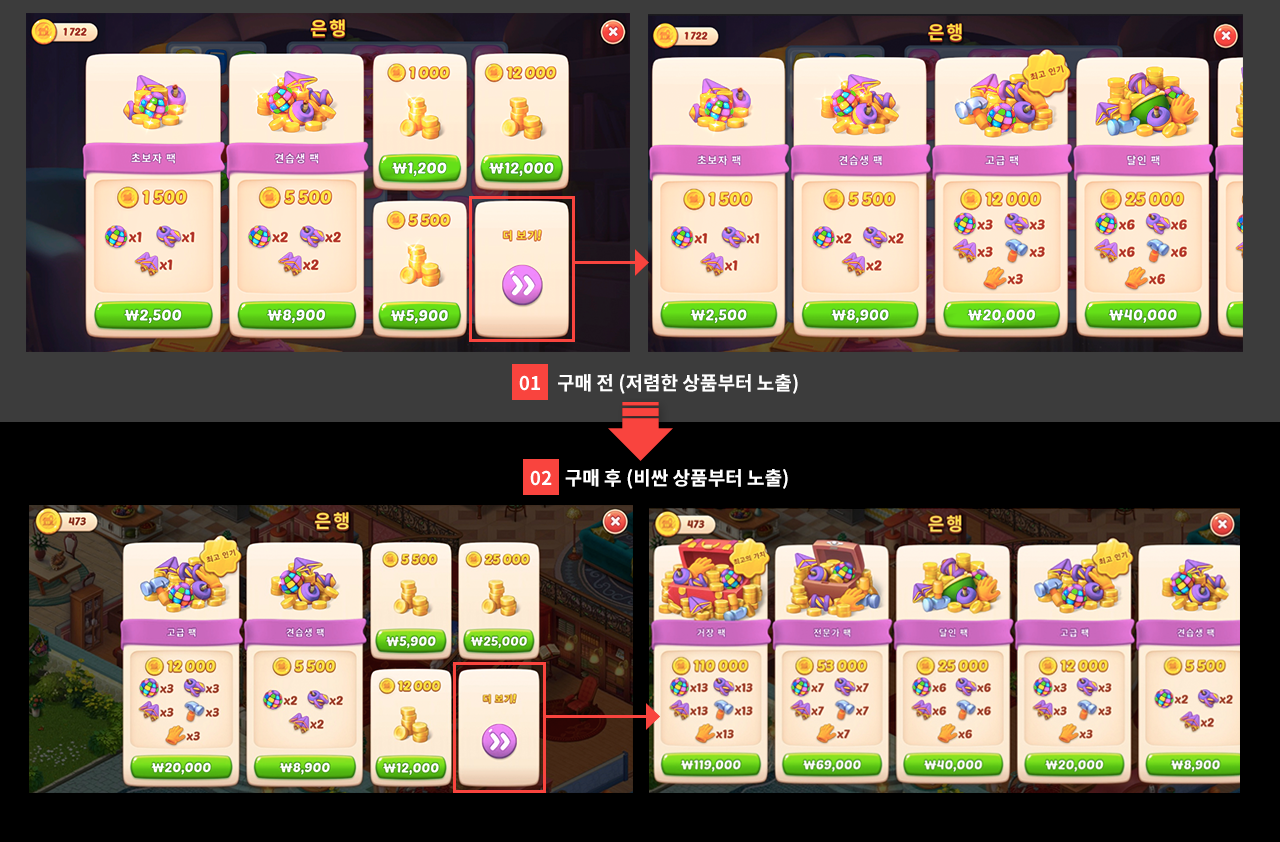 From the perspective of the KPI of the mobile game, the wallet kicking technique is a strategy to increase the ARPPU [8] after solidifying the payment user base by increasing the PUR [6] and ARPDU [7]. However, before using these techniques, you must first consider whether the game you have developed gives users the pleasure to pay for and whether you have designed the product to make them feel positive about their post-payment experience.

1. Provide inexpensive and efficient products so that users can easily start paying for the products.

3. Don’t forget that the most important thing is the fun of the game and the user experience after payment.

[5] In the puzzle game genre, the opportunity for a user to manipulate a block is collectively referred to as Move, which allows the user to pay in-game currency (ex) and receive additional opportunities through the following page when the user is in crisis of game over.

[6] PUR: Paying User Rate (percent of all users who made cash payments)

[*] Please refer to my other post about the store star request pop-up of the app, which is also an example of footing technique on the doorstep.